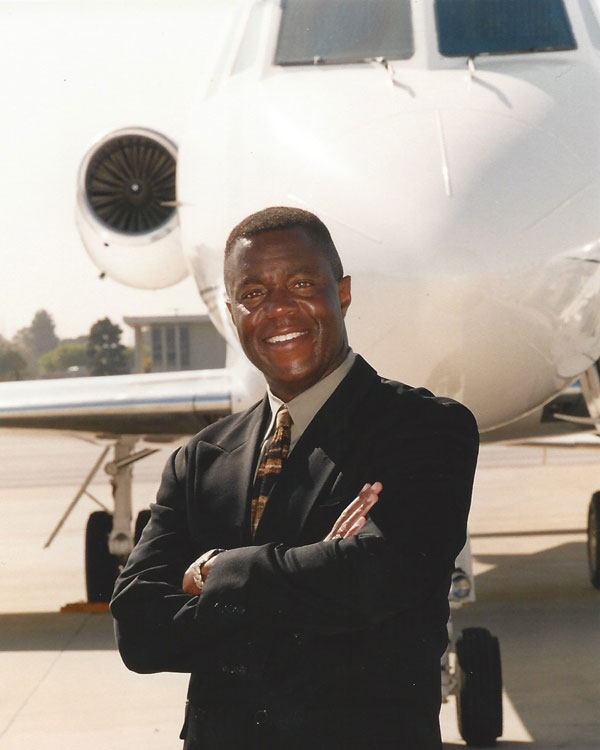 Ron’s passion for aviation has been a part of his being ever since he could remember, but it was cemented by the age of 12 when he went to an airshow to see the Blue Angels. He was all in! His dream of becoming an Astronaut was born!

Ron received his sailplane rating at the young age of 14. By 16, he received his power rating, but through the required physical exam he learned that he was slightly color blind. At this point he knew that the dream of being an astronaut was dead. Ron had to come to terms with letting go of his dream. He then set a goal to make enough money so he could afford to buy and fly a Lear Jet. He reached that goal. Ron worked hard and his company bought a Gulfstream III.

Graduating from California State University Northridge with a BS in Business Administration, Ron became a serial entrepreneur. He founded several companies including Sandpiper Casuals manufacturing Velcro wallets, backpacks, and soft luggage. And West Coast staffing, a nurse’s registry who provided hospitals with nursing staff. Ron also had an interest in Real Estate. In short order Ron entered the field and became the top agent at Century 21 Lamb. Within three years he became the number 4 agent out of over 120,000 agents worldwide. He was featured in the Century 21 national TV ads and to this day he is still featured in the Century 21 training videos. Ron also became a one-on-one coach for Mike Ferry, a nationally recognized leader in training and mentoring top producing real estate agents and brokers. All along, Ron was buying and developing real estate. In 2005, he built his first commercial building in Henderson Nevada. It is a 40,000 sq. ft. 8 bay full flight simulation complex which is the home to his company, Las Vegas Flight Academy.

Besides Ron’s passion for aviation, he is also an avid snow skier, who was on the California State University Northridge Ski team that qualified for the nationals in Steamboat Springs in 1979. Ron’s other interests include water skiing, coaching and mentoring the top real estate agents in the world. He has devoted years to coaching youth basketball. There is nothing that would make Ron happier than spending the rest of his days mentoring, training and inspiring the minority pilots of tomorrow.

Anthony Linquata is a seasoned Senior Executive with over 30 years of experience in helping nonprofit and private companies reach their full potential by managing change through business development, implementation and development of scalable operational systems, and leadership advisement.

Anthony’s work in nonprofits began with his work with abused and neglected children in residential settings. For over 26 years he served the County of Los Angeles and over 29,000 children in the Child Protective Services system. Many of those 29,000 children would go on to be reunited with family, attend college and complete degrees from such schools as UCLA, USC, California State University Northridge, UCSB, and UCSD. Anthony served as Executive Director at Children Are Our Future and has consulted with numerous nonprofits in California and New Mexico. He worked closely with California Alliance of Child & Family Services to develop and establish peer to peer evaluation standards for residential treatment facilities across California. His continued work with nonprofits extended to his volunteer efforts with Big City Mountaineers, PUSH (People who Understand the Severely Handicapped), Tree People, and Success is Our Future (a college scholarship program for youth in the Los Angeles Probation System).

Anthony followed-up his career in nonprofits with positions in executive management with MASH Studios, an office interiors design firm. Their clients include tech companies that we rely on and carry in our pockets every day. His next project was Modloft. Modloft is the first high-end furniture company to sell exclusively online. Modloft began their online presence selling exclusively through their website, then becoming one of the very first furniture companies to partner with online giant Wayfair.

His passions have now led him back to the nonprofit world…

“My passion is working with people to solve complex organizational and leadership challenges. Whether those problems are large-scale social issues, organizational dysfunction, or leadership effectiveness, I thrive on understanding the whole system and finding creative and engaging solutions using relationship oriented and strength-based approaches to create inclusive, mission-driven positive environments for all.”
Anthony Linquata